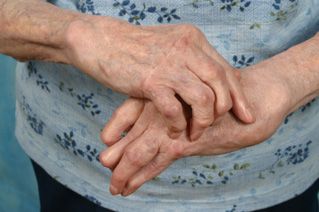 Arthritis, any of more than 100 different diseases causing pain, stiffness, and in most cases, swelling in the joints. Arthritis affects people of both sexes and of all races, socioeconomic levels, and geographic areas. Joints, found where two bones in the body meet, cushion the bones and prevent them from rubbing against each other during movement. Joints are composed of cartilage—smooth, elastic tissue—surrounded by a casing called the joint capsule. The joint capsule is lined with a synovial membrane that secretes synovial fluid, a liquid that fills the joint cavity and further reduces friction between the bones. Although all arthritic conditions involve joint pain, the severity, duration, and effects of this pain vary considerably from one condition to another.Inflammatory types of arthritis are characterized by their tendency to cause inflammation in joints and tendons. In inflammatory arthritis, the synovial membrane becomes swollen and inflamed, causing pain and stiffness. Chemicals released in the inflamed tissue increase blood flow to the joint, causing it to look red and feel warm to the touch. To reduce pain, patients with arthritis may favour affected joints, holding them in a fixed position. This causes the muscles surrounding the joints to stiffen and weaken and the tendons, which attach muscles to bone or to other muscles, to tighten. As a result, joints may contract or change shape and patients may eventually lose mobility. Inflammatory arthritis may be caused by autoimmune diseases in which the body’s immune system attacks its own healthy tissue. It can also be caused by crystal deposits in the joints or by infection.

In autoimmune disease, a glitch in the immune system leads disease-fighting cells to attack the body’s own healthy tissue, in this case the synovium. The causes of arthritis-related autoimmune responses are not well understood, but scientists believe genetics may play a role. Although some genes have been identified that predispose people to certain forms of inflammatory arthritis, these genes are not the only factor. Researchers continue to search for other genes involved, and for external triggers, such as viruses, bacteria, or other environmental agents, that may set off the disease in genetically predisposed people

Rheumatoid arthritis
One of the most common forms of arthritis due to autoimmune disease is rheumatoid arthritis (RA). Often regarded as the most serious, painful, and disabling of all forms of arthritis, RA affects people usually between the ages of 20 and 40, and is three times more likely to affect women than men. RA occurs most often in the same joints on both sides of the body, such as the hands, wrists, elbows, shoulders, knees, ankles, and feet. The immune system attacks the joint’s synovial tissue. The resulting inflammation can lead to widespread and severe joint damage, which may eventually restrict a patient’s mobility. In severe cases, the bone itself erodes and joints may dislocate, causing the joint to freeze in one position.

The most common form of arthritis in children, juvenile rheumatoid arthritis (JRA), it causes pain, swelling, and stiffness. JRA can be mild and disappear after several years, or in severe cases, JRA can last a lifetime.

Another autoimmune disorder, systemic lupus erythematosus, commonly known as lupus, is an arthritis-related condition causing fever, rash, and swelling of the joints. Lupus can have serious complications, including inflammation of the lungs, kidneys, brain, bone marrow, and the lining of the heart. Lupus is most common in young women aged 15 to 40. Females are nine times more likely than males to develop the disease.

Ankylosing spondylitis
Ankylosing spondylitis (AS) is due to chronic inflammation of the spine. AS often begins with pain and stiffness in the sacroiliac joint, a joint between the lower bones in the spinal column. Although AS is often confined to the sacroiliac joint, it may progress up the spine and into the ribs and neck. As the disease progresses, joint inflammation around the bones of the spinal column, or vertebrae, may cause these bones to fuse. AS may also affect the hip, knee, and shoulder joints. The disease usually develops before age 40 and is two to three times more common in men than women. The tendency to develop AS is genetic. Tests show that 90 percent of all people with AS carry a specific gene, called the HLA-B27 gene. Because not everyone with this gene develops the disease, researchers believe an infectious or environmental trigger is also involved.

Crystal deposition – Gout
Gout is often characterized as an inflammatory form of arthritis. But unlike the inflammation in RA and lupus, which is related to the immune system, joint inflammation in gout is caused by deposits of sodium urate crystals in the joints. The crystals form from excess uric acid, a waste product circulating in the blood. Gout initially affects a single joint, often the joint in the big toe. If untreated, it can become chronic and affect many joints. Gout affects most often males between the ages of 40 and 50. Ten to 20 percent of patients with gout have a family history of the disease. Excessive alcohol consumption, obesity, and high blood pressure may also increase an individual’s risk of developing gout. Gout is one of the most treatable forms of arthritis and with proper diet and care, inflammation can be prevented entirely.

Reiter’s syndrome develops as a complication of infection in the bowels, genital organs, or urinary tract. There are two forms of Reiter’s syndrome. The first occurs with sexually transmitted infections, especially chlamydia, and is the most common cause of arthritis in young men. The second form is more common in older people, and usually occurs with intestinal bacterial infection, such as salmonella. The symptoms of Reiter’s syndrome are pain and swelling in the joints and tendons, and inflammation of the eyes. Typically occurring in discrete episodes lasting weeks to months, Reiter’s syndrome may disappear after one episode or it may recur and become chronic. Most Reiter’s syndrome patients carry the HLA-B27 gene, the same gene observed in 90 percent of patients with ankylosing spondylitis. As is the case with AS, the HLA-B27 gene does not appear to cause the disease, but instead predisposes individuals to a disease that is triggered by infection.

Diagnosis and treatment
Rheumatologists, physicians who diagnose and treat arthritis and related conditions, use a variety of diagnostic techniques. The first step is a thorough history and physical examination, during which the doctor questions the patient about symptoms and medical history to learn about potential exposure to infectious agents or a family history of arthritis. The patient is examined to determine the pattern of joints affected. With this information, rheumatologists are usually able to make a diagnosis.

Laboratory tests are used to help diagnose inflammatory arthritis. When there is inflammation in the body, red blood cells sink faster. This test lets physicians evaluate how severe the inflammation is. Rheumatologists also test a patient’s blood or synovial fluid for the presence of specific antibodies—disease-fighting agents activated in the body by infections. The presence of rheumatoid factor antibodies, for example, is an indication of rheumatoid arthritis, and antinuclear antibodies can be an indication of lupus. The presence of these antibodies along with clinical symptoms help establish the diagnosis. Physicians may also elect to test for the presence of specific genes, such as the HLA-B27 gene.

There is no known cure for most forms of arthritis and related conditions. The primary goal of treatment is to reduce joint pain and inflammation and to maximize joint mobility. To this end, rheumatologists work closely with patients and their families to develop a treatment regimen incorporating exercise and rest as well as pain-relieving and anti-inflammatory drugs, and in some types of arthritis, drugs that slow the progress of the disease.

Low impact, regular exercise is very important in maintaining muscle strength and joint mobility. One of the best forms of exercise for people with arthritis is swimming, an activity that lets participants use muscles with minimal joint strain. Arthritis sufferers benefit from physical therapy programs specially tailored to their age level and degree of mobility. Stretching and hot showers before exercise and applying ice packs to muscles and joints after exercise minimize discomfort related to exercise. Rest is another crucial element of arthritis treatment. In addition to recommending at least eight hours of sleep a night, rheumatologists may also advise patients to use a cane, splint, sling, or special footwear to rest or stabilize affected joints periodically during the day.

Non-steroidal anti-inflammatory drugs (NSAIDS), such as aspirin, naproxen, and ibuprofen, and celecoxib decrease pain and inflammation in swollen joints. NSAIDS are not always powerful enough to control inflammation, and rheumatologists may prescribe glucocorticoids in low doses, to be taken by mouth or injected directly into affected joints. In potentially more severe types of inflammatory arthritis, such as RA, doctors may prescribe disease modifying anti-rheumatic drugs (DMARDs). DMARDs, such as hydroxychloroquine, sulfaslazine, and methotrexate, leflunomide, and etanercept may slow the progress of some forms of arthritis, preventing joint destruction and damage.

Almost all drugs used to treat arthritis can have side effects and may not work for all patients with arthritis. Researchers are investigating alternatives to traditional drug therapy and other treatment approaches.

If joint damage is severe, patients with arthritis may need to have surgical treatment. Total hip and total knee replacements can significantly relieve pain and improve joint function. In some cases, surgeons replace damaged or deteriorating joints with artificial stainless steel or plastic components in a procedure called arthroplasty.

Action of Duo ArthriKal
Is a two prong approach made of Capsules and a complementary Lotion. For maximum efficiency, it is preferable to undertake a cure with both products.

ArthriKal-I is a penetrating oily lotion which alleviates the pain by reducing the inflammations of the tendons, the muscles and the ligaments.

ArthriKal-II is a complex compound of plants which reduces the inflammations of the articulations, with an internal and direct action on the cartilaginous tissue. It also allows the dissolution of calcareous or uric acid crystallisations, while balancing the acidity level in the blood in order to reduce the problem of crystallization at its source. It also fights articular infections with antiseptic plants.

ArthriKal I and II do not contain any corticosteroids for the treatment of inflammations; therefore there are no risks for bones demineralization, which would weaken furthermore the functional capacity of the articulations.