Angina pectoris derives from Latin and translates as 'tight chest'. It feels like an oppressive, heavy, crushing pain or a constricting feeling in the center of the chest behind the breast bone (sternum) or in the left side on the front of the chest. The pain can radiate out to either one or both arms, more often the left hand. It can be experienced in the throat, jaw, the stomach and, more rarely, between the shoulder blades. 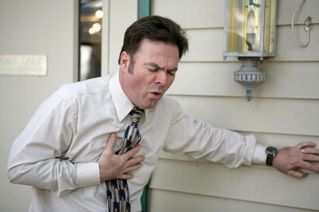 Angina pectoris is the chest pain due to an ischemia (a lack of blood and hence oxygen supply) of the heart muscle, generally due to the obstruction or spasm of the coronary arteries (the heart's blood vessels). Coronary artery disease, the main cause of angina, is due to atherosclerosis of the cardiac arteries. The term derives from the Greek ankhon ("strangling") and the Latin pectus ("chest").

Angina indicates that CHD is present and that some parts of the heart are not receiving an adequate blood supply. Episodes of angina cause permanent damage to the heart muscle. Angina pectoris is a temporary part of the heart muscle not getting enough blood, whereas a heart attack occurs when some part of the heart is suddenly and permanently cut off from the blood supply which causes permanent damage to the heart muscle. Patients who have already suffered a coronary heart disease (CHD) event such as angina pectoris are at an increased risk of recurrent fatal or non-fatal events compared with healthy individuals of the same age. Angina pectoris is thought to be a precursor to approximately 40 percent of acute coronary events.

The types of Angina:

We can consider three types of Angina.

Stable Angina: Stable angina is a repeating pattern of chest pain which has not changed in character, frequency, intensity or duration for several weeks. The level of activity or stress that provokes angina is predictable and the pattern changes slowly. Stable angina is the most common form and it appears gradually. In case of stable angina patients have an increased risk of a heart attack. A crucial component of the management of the pain associated with angina pectoris is identifying sources of stress and creating effective methods to minimize stress.

Unstable Angina: Unstable angina is a chest pain that is variable, either increasing in frequency or intensity and with irregular timing or duration. Unlike stable angina, unstable angina does not appear gradually, it first appears as a severe episode. An established stable angina might change suddenly or be provoked by less stress than in the past or an episode might suddenly occur even at rest. If the pattern of an episode changes, for example if a previous episode was only brought on during physical exertion, but an episode suddenly occurred at rest it is likely to be unstable angina.

Prinzmetal Angina: Prinzmetal or variant angina is caused by a vasospasm, a spasm that narrows the coronary artery and decreases the blood flow to the heart. Prinzmetal Angina usually occurs in arteries already narrowed by atherosclerosis; in fact most people with it have severe coronary atherosclerosis in at least one major vessel. The spasm usually becomes very close to the blockage. Unlike stable and unstable angina, Prinzmetal Angina usually occurs when a person is at rest or sleeping and not after physical exertion or emotional stress. It is associated with acute myocardial infarction, severe cardiac arrhythmias including ventricular tachycardia and fibrillation, and sudden heart death.

The causes of Angina:

Many factors can lead to an Angina. The most important risk factors are the followings.

Diabetes: Insulin resistance and secondary hyperinsulinemia are recognized risk factors for development of atherosclerosis. Hyperinsulinemia (high insulin levels in the blood) is a marker for the Insulin Resistance Syndrome. Hyperinsulinemia results from the body’s attempt to overcome insulin resistance by secreting more insulin from the pancreas. Diabetic patients with unstable angina have a higher mortality than non-diabetic patients. The presence of diabetes is a strong risk factor for coronary artery disease and cardiac death in elderly haemodialysis patients.

Obesity: Obesity is a condition in which the natural energy reserve, stored in the fatty tissue of humans, is increased to a point where it is a risk factor for certain health conditions or increased mortality. Obesity develops from the interaction of individual biology and the environment. Excessive body weight has been shown to predispose to various diseases, particularly cardiovascular diseases. Obesity is both an individual clinical condition and is increasingly viewed as a serious public health problem.

Smoking: Tobacco smoke contains nicotine, a stimulant. Nicotine acts as an inhibitor (or block), that attaches to cholinergic receptors (receptors for acetylcholine) in the brain that are usually used to control respiration, heart rate, memory, alertness, and muscle movement. As such all are affected by smoking. Normally, acetylcholine (a similar, naturally present healthy neurochemical) would attach to the receptors, however nicotine interferes in this natural biological process and attaches to the receptors and blocks them. The main health risks in tobacco pertain to diseases of the cardiovascular system, in particular smoking being a major risk factor for a myocardial infarction (heart attack), diseases of the respiratory tract such as Chronic Obstructive Pulmonary Disease (COPD) and Angina pectoris.

Signs and symptoms: Most patients with angina complain of chest discomfort rather than actual pain: the discomfort is usually described as a pressure, heaviness, squeezing, burning, or choking sensation. Apart from chest discomfort, anginal pains may also be experienced in the epigastrium (upper central abdomen), back, neck, jaw, or shoulders. Typical locations for radiation of pain are arms, shoulders, and neck. Angina is typically precipitated by exertion or emotional stress. It is exacerbated by having a full stomach and by cold temperatures. Pain may be accompanied by breathlessness, sweating and nausea in some cases. It usually lasts for about 1 to 5 minutes. Chest pain lasting only a few seconds is normally not angina.

Myocardial ischemia comes about when the myocardium, which is more commonly called the heart’s muscles, fails to take the quantity needed of blood and oxygen in order to function correctly. The inability to acquire blood and oxygen, on the other hand, is due to blocked or narrowed blood vessels.

Some experience "autonomic symptoms" (related to increased activity of the autonomic nervous system) such as nausea, vomiting and pallor.

A variant form of angina (Prinzmetal angina) occurs in patients with normal coronary arteries or insignificant atherosclerosis. It is thought to be caused by spasms of the artery. It occurs more in younger women.