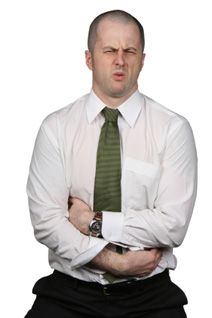 Flatulence is the presence of a mixture of gases known as flatus in the digestive tract of mammals expelled from the rectum. The olfactory components of flatulence include skatole, indole, and sulfurous compounds. The non-odorous gases are mainly nitrogen (ingested), carbon dioxide (produced by aerobic microbes or ingested), and hydrogen (produced by some microbes and consumed by others), as well as lesser amounts of oxygen (ingested) and methane (produced by anaerobic microbes).

A certain amount of gas is present in your GI tract at any one time, mainly in your stomach and colon. The average person passes gas about 10 times each day and up to 20-25 times normally. More than that may be excessive. An estimated 30-150 grams of this undigested food reach the colon in the form of carbohydrate every day. But this amount can vary with diet and how well your GI tract is functioning. The unpleasant odor often associated with flatus is generally attributed to trace sulfur-containing compounds, produced only by particular bacteria not found in everyone.

The causes of Flatulence:
Excess gas in the digestive tract can come from 2 sources: increased intake of gas, for example, from air you swallow; or increased production of gas as certain undigested foods are broken down by harmless bacteria normally found in your colon.

Swallowed air (aerophagia): This can occur with improper swallowing while eating or even unconscious swallowing of air out of habit. The activities that cause you to swallow air include rapid drinking, chewing gum, use of tobacco products, sucking on hard candy, drinking carbonated beverages, loose dentures, and hyperventilation in anxious people. The remaining gas moves into your small intestine. Air can be absorbed, but some moves along to the large intestine for release through the rectum.

Breakdown of undigested foods: Your body does not digest and absorb some carbohydrates (for example, the sugar, starches, and fiber found in many foods) in the small intestine because of a shortage or absence of certain enzymes there. So this undigested food then passes from the small intestine into the large intestine, where normal, harmless bacteria break down the food, producing hydrogen, carbon dioxide, and, in about a third of all people, methane. Eventually these gases exit through the rectum.

Lactase deficiency: Another major source of flatulence is lactase deficiency, which results in a decreased ability to digest lactose, a natural sugar found in milk and other dairy products such as cheese and ice cream and in certain processed food such as bread, cereal, and salad dressing. This flatulence is often associated with diarrhea and cramping but can appear as only gas. Many people, particularly those of African, Native American, or Asian background, normally have low levels of the enzyme lactase needed to digest lactose after childhood. Also, as people age, their enzyme levels decrease. As a result, over time people may experience increasing amounts of gas after eating food containing lactose.

Constipation: After a few days of constipation, the saddles accumulated in the large intestine. The more functioning process of fermentation, there will be a greater production of gas.

Deceleration of the movements of the intestine: The work of the intestine can be slowed down after a heavy and fatty meal, more difficult to digest. The individual will tend to feel discomfort, but without having necessarily more intestinal gases.

Some diseases of the intestines or the liver: Certain pathologies cause distensions. Thus, a blocking of the intestine by a cancerous mass or the disease of Crohn (chronic disease which causes intestinal ulcers) can involve an increase in the volume of the intestine.

Prevention:
Experience has shown that the most common ways to reduce the discomfort of gas are changing diet, taking medicines, and reducing the amount of air swallowed. Flatulence is most often related to diet, and sometimes to those habits that cause you to swallow air. You can begin by trying to remove the problem foods from your diet. For many people, this is a trial-and-error procedure.

This may take some careful observation to notice what foods cause increased gas. Keep a food diary and note excess passage of gas. Any of the gas-producing foods can be removed from your diet one group at a time until you see relief. Sorbitol and fructose are common offenders, so try these first.

A more restrictive approach is to start with a very limited number of safe foods, and add one new food every 48 hours in order to determine what food or food group causes difficulty. If the offending food is found, then you can avoid eating that food or be prepared for its consequences.

If you suspect lactose intolerance is the problem, remove all dairy foods from your diet for 10-14 days to assess the effect on flatulence (using a diary). In general, avoid overeating because this contributes to flatulence as well as obesity. Limit high-fat foods to reduce bloating and discomfort. Your stomach will empty faster, allowing gases to move into the small intestine.