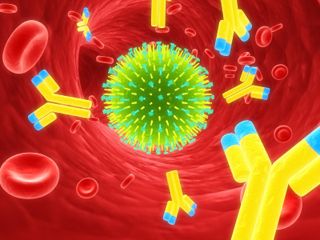 Free Radical,  is a molecule with one unpaired electron, or a molecule with two or more unpaired electrons that do not interact with each other. Free radicals are often very reactive and unstable. In body chemistry, free radicals are involved in processes such as the destruction of invading organisms by white blood cells. Free radicals might play a role in various diseases, such as arthritis, heart disease, and Alzheimer's disease. When natural enzyme controls fail, free radicals in the body attack lipids, proteins, and nucleic acids.

How Free Radicals are Formed
Normally, bonds don’t split in a way that leaves a molecule with an odd, unpaired electron. But when weak bonds split, free radicals are formed. Free radicals are very unstable and react quickly with other compounds, trying to capture the needed electron to gain stability. Generally, free radicals attack the nearest stable molecule, "stealing" its electron. When the "attacked" molecule loses its electron, it becomes a free radical itself, beginning a chain reaction. Once the process is started, it can cascade, finally resulting in the disruption of a living cell.

Normally, the body can handle free radicals, but if antioxidants are unavailable, or if the free-radical production becomes excessive, damage can occur. Of particular importance is that free radical damage accumulates with age.

Oxidative stess
Once again, the balance is the key : This balance can be disturbed if
- the nutrition does not provide enough Antioxidants
- The enzym’s defense system is not efficient
- The production of free radicals  in the body is abnormally high
This means that the organism is occupied by free radicals that are ready to take over control over the body- which is to be called Oxidative stress.
In humans, oxidative stress is involved in many diseases, such as atherosclerosis and polyarthritis, Parkinson's disease and Alzheimer's disease, but also heart diseases, cancer, osteoporosis, and a premature aging process.

Treatments
1) ImmunoVie: Complex compound of medicinal plants with antioxidant properties which preserve and reinforce the immune defences, allowing the body to resist to the various external invaders (bacteria, viruses, fungi) that may cause diseases. Its anti-free radical effect fights against the oxidation of the cells, tissues and organs constituent, among others, of the digestive system, the heart, the brain, the veins and arteries, the skin.

2) DynOrgan:  depurative that cleans vital organs (liver, spleen, pancreas, kidneys, gall-bladder, etc.). DynOrgan clears conduits from stones (calculus) and accumulations of fat. It also regulates and invigorates the metabolism. It is composed of plants and substances that ensure the proper functioning and the stimulation of vital organs.