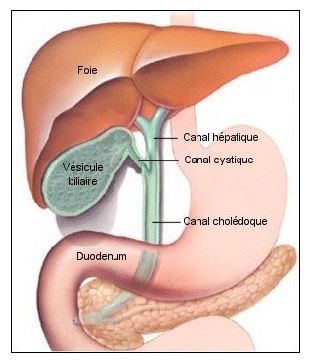 The Gallbladder, a muscular organ that serves as a reservoir for the bile is present in most vertebrates. In humans, it is a pear-shaped membranous sac on the under surface of the right lobe of the liver just below the lower ribs. It is generally about 7.5cm long and 2.5cm in diameter at its thickest part; it has a capacity varying from 1 to 1.5 fluid ounces. The body (corpus) and neck (collum) of the gallbladder extend backward, upward, and to the left. The wide end (fundus) points downward and forward, sometimes extending slightly beyond the edge of the liver. Structurally, the gallbladder consists of an outer peritoneal coat (tunica serosa); a middle coat of fibrous tissue and unstriped muscle (tunica muscularis); and an inner mucous membrane coat (tunica mucosa).

The function of the gallbladder is to store bile, secreted by the liver and transmitted from that organ via the cystic and hepatic ducts, until it is needed in the digestive process. The gallbladder, when functioning normally, empties through the biliary ducts into the duodenum to aid digestion by promoting peristalsis and absorption, preventing putrefaction, and emulsifying fat.

The major disorder associated with the gallbladder is the presence of gallstones, varying in shape and size from a pea to a small pear. Accreted from the constituent salts in the bile, they are most common in diabetic patients, in blacks, and in women; their presence increases with age. Two of the reasons for the growth of gallstones are believed to be the presence of excessive amounts of substances such as calcium and cholesterol in the bile and the retention of bile in the gallbladder for a long period of time. The usual treatment for gallstones is surgical removal. Two naturally occurring bile salts, chenodeoxycholic acid and ursodeoxycholic acid, taken orally dissolve gallstones in some patients. Ultrasound treatment to shatter the stones also eliminates the need for surgery in some cases.

Another common disorder of the gallbladder is cholecystitis, or inflammation of the organ, which is believed to be a result of the presence of highly concentrated bile. Chronic cholecystitis is sometimes aggravated by bacterial infection, leading to perforation and peritonitis. Less common is the growth of malignant tumours, which are associated with gallstones and constitute about 3 percent of all cancer in humans.

PRODUCT RELATED TO THIS SYMPTOM