Herpes (Greek herpein, “to creep”), name applied to several types of skin eruptions characterized by formation of blisters. The term embraces primarily two distinct disorders, herpes simplex and herpes zoster, both caused by types of herpesviruses. Other herpesviruses include Epstein-Barr virus, the cause of infectious mononucleosis (see Mononucleosis, Infectious) and cytomegalovirus, which can lead to birth defects when the virus invades pregnant women. Together, these viruses are estimated to cause more human illnesses than any other group of viruses. 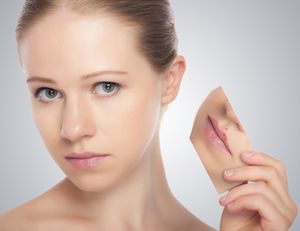 Two types of herpes simplex are known. The first causes cold sores or fever blisters—an eruption of blisters that often occurs during the course of or after one of a variety of diseases associated with fever (most commonly colds, influenza, and pneumonia). The blisters usually appear around the mouth and on the lips (herpes labialis); about the nose, face, and ears; and in the mouth and pharynx. The causative virus has been shown to be present in the cell bodies of the facial nerve in people who do not have blisters. It is this reservoir of latent virus that is the source of repeated attacks. Except for lotions to relieve pain, itching, or inflammation, no established therapy has been developed.

The second type of herpes simplex virus is the usual cause of genital herpes. Herpetic infections of the genital area have become increasingly common. Sometimes accompanied by headache and fever, the condition usually begins with a mild itching, followed by the development of clusters of blisters that break and crust to form scabs that eventually dry up. The process may last one to three weeks. In many cases new clusters of blisters appear as others heal. When a baby is born to a woman who has active genital herpes lesions, the infant is at high risk of contracting an often fatal infection, so these infants are often delivered by cesarean section.

Herpes Zoster – Zona - Shingles
Known as shingles, this is a one-time recurrence of the symptoms of chicken pox, usually during adulthood. It is caused by the chicken pox virus attacking a sensory nerve. The skin over the nerve generally breaks out in blisters a few days after the onset of the disorder, which is accompanied by pain and frequent numbness or hypersensitivity along the course of the nerve, usually the trunk. The blisters are at first clear, but become cloudy within a few days and form crusts that dry up after five or ten days.

The skin manifestation of herpes zoster is not serious, but the pain caused by the inflammation of the underlying nerve can be severe, lasting for weeks; recovery may be followed by persistence of neuralgia in the area of the involved nerve. Normally, medication relieves pain, and the disease subsides spontaneously. More severe cases may be treated with such steroids as cortisone. In cases of persistent pain, the involved nerve may be either blocked by drugs or cut.

Herpetic infections of the eye, called dendritic keratitis, can cause scarring of the cornea. They are treatable with idoxuridine and vidarabine.

Action of HerpeCure
Up to now, there is no medication the can suppress the virus of genital herpes, however HerpeCure act in two ways:

- The plants composing HerpeCure act on the infected zones by diminishing the development of the blisters and lesions, and by alleviating the irritation and pain while reducing the duration of the episode. In particular, these plants accelerate the process of cicatrisation without leaving traces on the skin.

- In addition, by penetrating the skin and the nervous tissues of the infected zone, the active ingredients of the HerpeCure lotion take the same path as the one taken by the virus up to the ganglion. Thus, the antiviral properties of the plants can act directly on the virus by inhibiting its multiplication process.